Johannes Kepler, between 1609 and 1618, found that planets, and in fact all orbiting bodies, follow three laws of planetary motion:

The following program demonstrates the first two of Kepler’s Laws of Planetary Motion by PLOTting elliptical orbits with the spacing between the individual PLOT positions at equal time intervals. The PLOTted pixel (representing the orbiting planet) is seen to ‘accelerate’ as it passes close to the Sun (the small CIRCLE in the centre of the screen) particularly as the orbits become more elliptical (higher eccentricity) against the values INPUT for initial velocity.

Figure 5.4: Kepler’s 1st and 2nd Laws of Planetary Motion
A planet PE (shown in a highly elliptical orbit for clarity) sweeps out an equal area (shaded) in an equal time interval — its velocity constantly changing according to its current distance from the Sun. 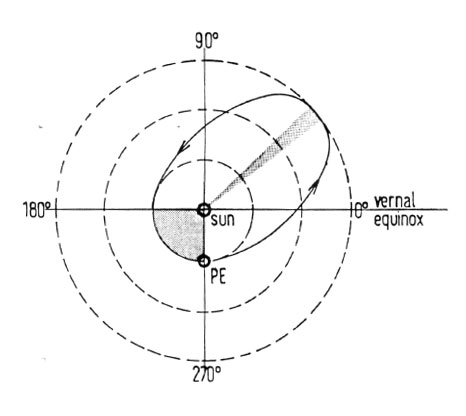 Figure 5.5: Kepler’s 3rd Law of Planetary Motion
Each planet sweeps out an area (shaded) in an equal time interval proportional to the orbit radius. In this simplified solar system with the orbits equally spaced, P1 covers a complete quadrant whilst P2 covers 0.35 of a quadrant (1/√23) and P3 covers 0.19 of a quadrant (1/√33). 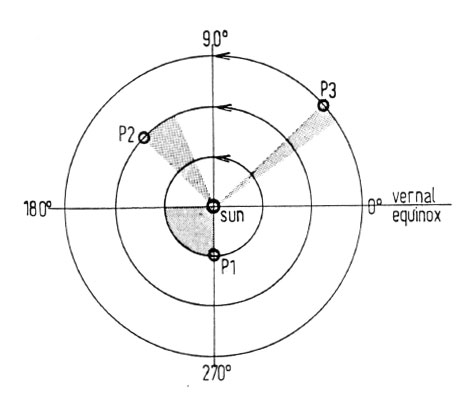 If an INPUT of >12 is ENTERed then odd things start happening with the PLOTted results. These have nothing to do with Kepler’s Laws — but with short-comings of the program. They have, however, been deliberately left in to demonstrate three effects that can happen to a body in orbit about, or passing close to, a more massive planet.

An INPUT of 12 will cause rotation of the whole orbit so that the aphelion position (and also the perihelion position although this is not obvious) moves in a clockwise direction. This effect mimics the orbit rotation of any planet but even in the case of Mercury, the planet closest to the Sun and with the highest velocity of all the planets, it is only detectable over hundreds of complete orbits. (See Figure 5.7) 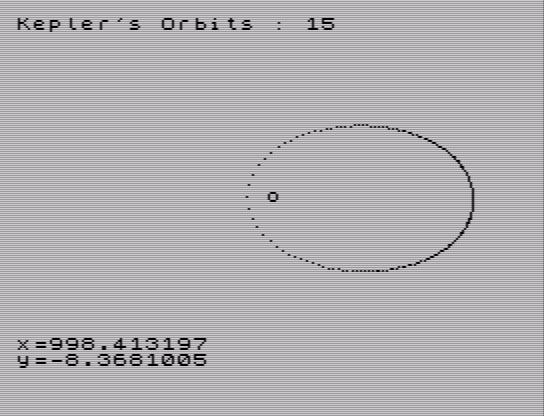 An INPUT of 10 will cause the capture of the body into a smaller and faster orbit. It is believed that many comets have been captured into smaller orbits by passing sufficiently close to the massive planet Jupiter and, to a lesser extent, Saturn. This obviously assumes a third body which our program does not contain but it remains of interest to demonstrate an effect. (See Figure 5.8)

Figure 5.8
Capture of larger orbit into a smaller orbit. 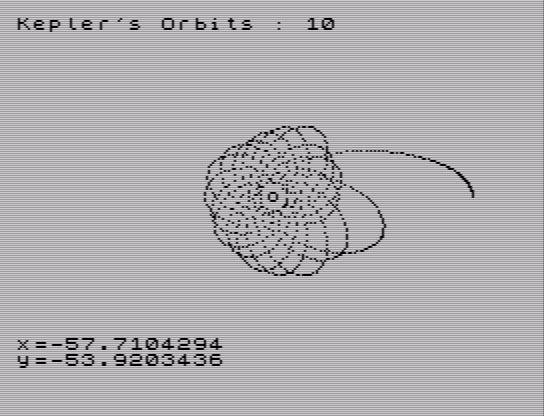 An INPUT of 7 or less will cause the planet to pass so close to the Sun that the planet is ejected out of the solar system in what is called a sling-shot manoeuvre. In reality no planet would be subjected to this indignity — if such a thing ever occurred it would have been billions of years ago — there is no place for rebel planets today. However space scientists use this effect to send spacecraft from one planet to the next in a game of planetary billiards, poaching a little of the host planet’s gravitational field to accelerate the craft to high velocities impossible to achieve by rocket power from Earth.

An explanation
Why does this program produce these effects? Quite simply because the program does not calculate with sufficient accuracy the position of the planet when close to the Sun. The minutest error is added to the next computation producing the effects displayed. The situation is not assisted by the fact that, at the point of perihelion, the vertical or y coordinates as PLOTted pass from positive to negative values. All in all, a case of using a potential disadvantage to good effect, even if not good mathematics!

Amending the program
Once the program has been RUN a few times, try amending (one at a time) some of the variables. The most important variable to change is h, which controls the STEP intervals in the FOR/NEXT loops to RUN the program. If it is made smaller then the orbit will be PLOTted with greater accuracy, particularly at perihelion position. However it will now PLOT incredibly slowly whilst the planet is near aphelion. You change the value — you take your choice.

This particular program is used a number of times elsewhere in this book — usually with modifications to suit particular purposes.